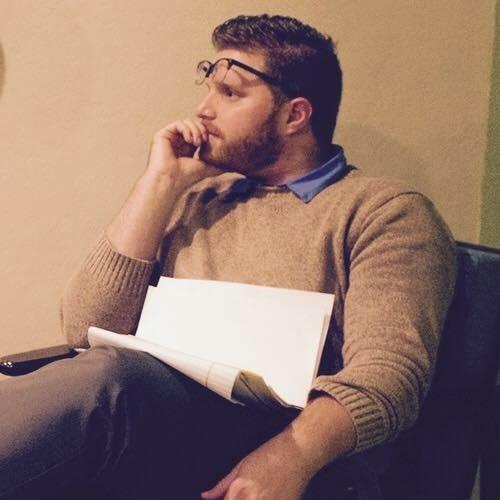 JOHN GRIMMETT is a composer, writer, and director.

A graduate of the Moores School of Music at the University of Houston where he studied playwriting with Edward Albee, he completed graduate studies at the Graduate Musical Theatre Writing Program at New York University. Since 2010, his work has been performed internationally by the Washington National Opera, Fort Worth Opera, and Houston Grand Opera, as well as at universities and conservatory training programs at the University of Houston, New York University, and Indiana University, among many others. Additionally, his work has been published by G. Schirmer and recorded by Angels Share Records. In 2015, he was the runner-up for the American Prize in Composition (Opera, Theater, and Film Division).

Since 2017, Mr. Grimmett has lead Ovation Theatre at Dawson High School as the Head Theatre Director where he co-directs and designs all mainstage theatre productions as well as leads the curricular and programmatic vision for the department. He is also an adjunct faculty member in the Department of Theatre and Film at San Jacinto College-Central where he teaches courses in Stagecraft. At Dawson, Mr. Grimmett helped form the school’s first International Thespian Society Troupe (#8922) with over 45 charter members. Recent student achievements include six National Qualifying students in the category of solo musical performance and a State Semi-Finalist Improv Troupe at the 2019 Texas Thespians Festival, and eight National Qualifying students in the category of solo musical performance and monologue as well as a State Scholarship Recipent at the 2020 Texas Thespians Festival. He has also launched a new works festival where students produce their own short plays and mentored the first UIL Theatrical Design State Qualifier in the school’s history. In 2019-2020, he was named the Glenda Dawson High School Teacher of the Year and the Pearland ISD Secondary Teacher of the Year, advancing as one of five finalists for Region IV Teacher of the Year. In 2020-2021, he lead Ovation Theatre to its fourth state appearance at the UIL One Act Play 6A State Meet since the school opened its doors in 2007.

A resident of Brazoria County most of his life, Mr. Grimmett lives near Independence Park in Pearland with his husband, Edgar, who is a professional illustrator and graphic designer, and his Australian cattle dog (blue heeler), Pilsner, whom he rescued in 2018 at the K-9 Angels Rescue in Houston. A member of the Educational Theatre Association (EdTA), the Texas Educational Theatre Association (TxETA), and the Texas State Teachers Association (TSTA), Mr. Grimmett is an active advocate for arts educators and students in his community and state, serving on the TxETA K-12 Committee as the High School Member-At-Large following his election to the position in September 2020 and the Texas Thespians Advocacy Network. He is also a member of Keep Pearland Beautiful and encourages all of his students to volunteer for and engage with organizations that promote civic involvement (including high school voter registration) so that we can build stronger relationships with our neighbors and sustainable communities for our collective future.