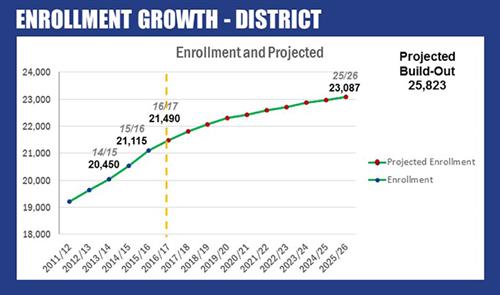 Addressing both a growing student population and aging facilities is a top priority of Pearland ISD’s Nov. 8 school bond election.

Working with architects, engineers and district staff, the Long-Range Planning Community Advisory Committee met over seven months to research the district’s top needs and narrow projects for final recommendation to the board of trustees.

In addition, committee members toured schools to learn about facility needs and heard presentations regarding facility conditions and growth demographics.

The committee and trustees ultimately focused on renovations and upgrades to older campuses as well as additional space at those near or over capacity, seeking to maximize current schools rather than build new ones.

Since Pearland ISD’s last bond election 10 years ago, the district has witnessed an increase of 6,000 students and anticipates 1,500 more in the next seven years.

While all 23 district schools will receive safety/security and technology upgrades (17 percent of bond projects), 13 campuses are slated for renovations or improvements because of growth or age: at the elementary and intermediate level, Challenger, C.J. Harris, Lawhon, Rustic Oak, Shadycrest and Silverlake elementary schools; Sablatura and Jamison middle schools; and Pearland Junior High East and West.

The bond will add significant space to the campus, with 28 new classrooms and an expanded cafeteria along with new computer labs, weight room, fine arts space, dance room and ROTC facility.

Some other improvements will include culinary arts facility renovation, sound walls in band, choir and orchestra and additional seats on the football field.

Both PHS and TCCHS are also nearing capacity, with PHS projected to exceed capacity in the next decade and TCCHS fewer than 100 students from its enrollment cap.

With about 250 TCCHS students attending PHS for part of the day, PHS cannot absorb additional students from DHS.

The bond includes many renovations to PHS to prepare for enrollment growth and upgrade the 25-year-old campus.

Some of these renovations include science labs, medical science and welding areas, auditorium renovation with fly system and scene shop, ROTC facility, conversion of the current administration wing into classrooms and a new centrally-located administration area.

With bond funding, TCCHS will see a new Career and Technical Education facility (for HVAC, welding and culinary arts programs), conversion of classrooms and dance area to CTE computer labs and a health science classroom and expansion of the agricultural facility.

“Our goal is to maximize taxpayer dollars while meeting the needs of current and future students. Our high schools particularly face challenges because of enrollment growth. The bond will allow us to address these needs without adding more portables,” Don Tillis, Pearland ISD director of facilities and planning, said.

For a complete list of bond projects at the high schools and other campuses, visit the bond election campus handouts page.