Pearadox steps up to challenge at Lone Star Regional 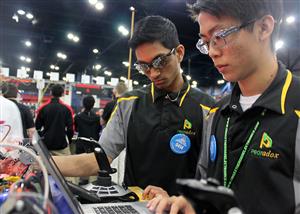 Comprising more than 25 team members from all three district high schools, the Pearadox team earned the Entrepreneurship Award at the FIRST (For Inspiration and Recognition of Science and Technology) competition.

The award recognizes a team that has developed a comprehensive business plan to define, manage and achieve its objectives while ensuring a self-sustaining program.

In addition, Dawson High School’s Tanner Blackard was named a Dean’s List Finalist, qualifying him to compete for the award at the FIRST world championship in late April.

Nominated by his team, Blackard numbered among only two Lone Star competitors selected as finalists for their leadership and dedication to FIRST programs.

Each January, FIRST Robotics announces a new competition game challenge for teams. Working with industry professionals, students have six weeks to determine a strategy and build a robot.

This year’s game involved driving robots over and under nine different interchangeable obstacles, as well as shooting 10-inch foam boulders through 16-by-24-inch goals with a 15-second autonomous period followed by 2 minutes 15 seconds of teleoperated control.

During its first Lone Star qualification match -- a random pairing of three teams versus three teams to determine playoff seeding -- Pearadox’s alliance beat one that included the 2015 world championship team.

Pearadox’s second match ended in a close loss, 75-73, to a perennial contender.

Although finishing qualification matches 4-4, Pearadox team members adapted to many challenges throughout the competition.

At one point, teammates tried to implement vision processing during a competition match, but their robot lost communication with the field management system.

After the match, students immediately met in the pit to analyze the communication loss and repair the issue before the next match.

“This is what competition is all about -- students learning not just how to design, build and test creative solutions to engineering problems but also how to fix them quickly when necessary,” Andrew Hartnett, lead mentor and NASA engineer, said.

Pearadox has claimed other successes this competition season, finishing among the top third of competitors at the Alamo Regional FIRST Robotics Competition and winning a judge’s award.