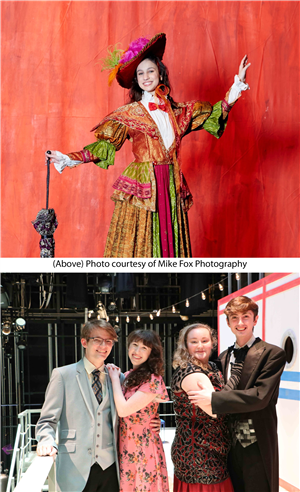 A vibrant version of the musical “Hello, Dolly!” will soon take place at Dawson High School.

A comedy based on a book under the same name by Michael Stewart and with music and lyrics by Jerry Herman, the production tells the story of a mischievous matchmaker, Dolly Gallagher Levi, in the early years of the 20th century. In her efforts to marry Horace Vandergelder, a well-known half-millionaire, the opportunist Dolly travels to New York City, where it becomes evident that she really wants him for herself.

The musical “Hello, Dolly!” can be seen in the DHS auditorium (2050 Cullen Blvd.) on Jan. 23-25 and Jan. 30-Feb. 1 at 7 p.m. Additionally, Pearland Mayor Tom Reid will be making a special guest appearance in the show for one performance only on Friday, January 31.

PHS’s Pearland Theatre presents “Anything Goes”, a production with music and lyrics by Cole Porter and set aboard an ocean liner bound from New York to England.

Among those traveling in the S. S. American are an evangelist turned nightclub singer, her friend Billy Crocker, who is a Wall Street broker, Hope Harcourt and her wealthy fiancé Lord Evelyn Oakleigh, and Moonface Martin, or Public Enemy Number 13. A story of love triangles, elaborate disguises, mistaken identities and marriage proposals, the musical proves that when it comes to destiny…anything goes!

Tickets are $10 for general admission and $12 for premium seating and can be purchased at https://bit.ly/35zPm92 .